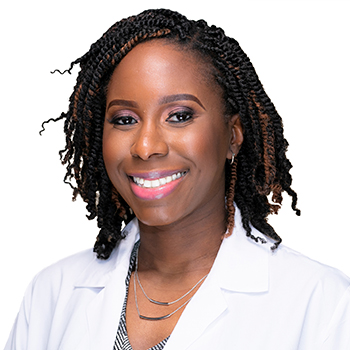 Dr. Samuels is an expert in normal and high-risk obstetrics. Her other areas of interests are minimally invasive surgery, treatment of fibroids, and infertility. In addition to providing obstetrical and gynecological services at Piedmont Newton Hospital, she performs da Vinci Robotic surgery at Piedmont Walton Hospital and performs gynecological services at Piedmont Rockdale Hospital. Dr. Samuels is an Adjunct Faculty member of Obstetrics and Gynecology for Augusta University/University of Georgia Medical Partnership helping train future physicians.

The only girl of seven siblings, family is very important to Dr. Samuels! Her mother, who is a nurse, has had a special influence on her life. Her parents immigrated to the United States as young adults; Dr. Samuels is a passionate supporter of healthcare for all, including immigrants. She relocated to Covington in 2015 when she joined Covington Women’s Health Specialists. She lives in Covington with her husband, son and daughter. She was successful in influencing her mother and other family members to move down south!

She participates in local charitable events and supporting our community Arts Association. She also enjoys traveling.